Around noon on Saturday, December 12, a report was made of a living shark on the beach of Ouddorp. The Reddingsteam Zeedieren (Sea Animals Rescue Team) visited the site and found that it was a blue shark (Prionace glauca). Sightings of blue sharks on the Dutch North Sea coast are very rare. The first description dates from 1927 and then five more observations have been noted. Attempts to return the animal to the sea were unsuccessful. The animal, a female of 186 cm, washed up at the shore after all attempts.

After consultation with Rotterdam Zoo, it was decided to transfer the shark to the aquarium of Rotterdam Zoo, where a quarantine basin with cold seawater was prepared for further investigation of the animal. There, the animal arrived around three o’clock in a container in which oxygen was administered. Carefully the animal was accustomed to the water of the quarantine basin and placed with transport box and already in the basin filled with a small layer of water and was slowly filled with cold (14 degrees Celsius) seawater.

A pelagic shark needs to keep swimming to the water through their gills and because the animal did not swim independently, it only had eye reflex at the time, the shark in the basin was kept moving by the zookeepers. After an hour, the shark managed to swim independently.

After consultation with colleagues inside and outside the organization, it was decided that the best option for success was to release the animal into the open sea as soon as possible, given its condition.

Thanks to the contacts of the RTZ, the KNRM (Royal Netherlands Sea Rescue Institution) was called in and indicated that they could sail at 9 pm. With the aid of the RTZ’s container, the animal was brought to the outer harbor of Stellendam with an active water flow through its beak along its gills and additional oxygenation in the water and transferred to the KNMR lifeboat. At 21.35 the animal was released into the open sea, about 25 km from the coast of Goeree.

We would like to thank the following people for their efforts. Because thanks to the smooth cooperation, it was possible to act quickly: 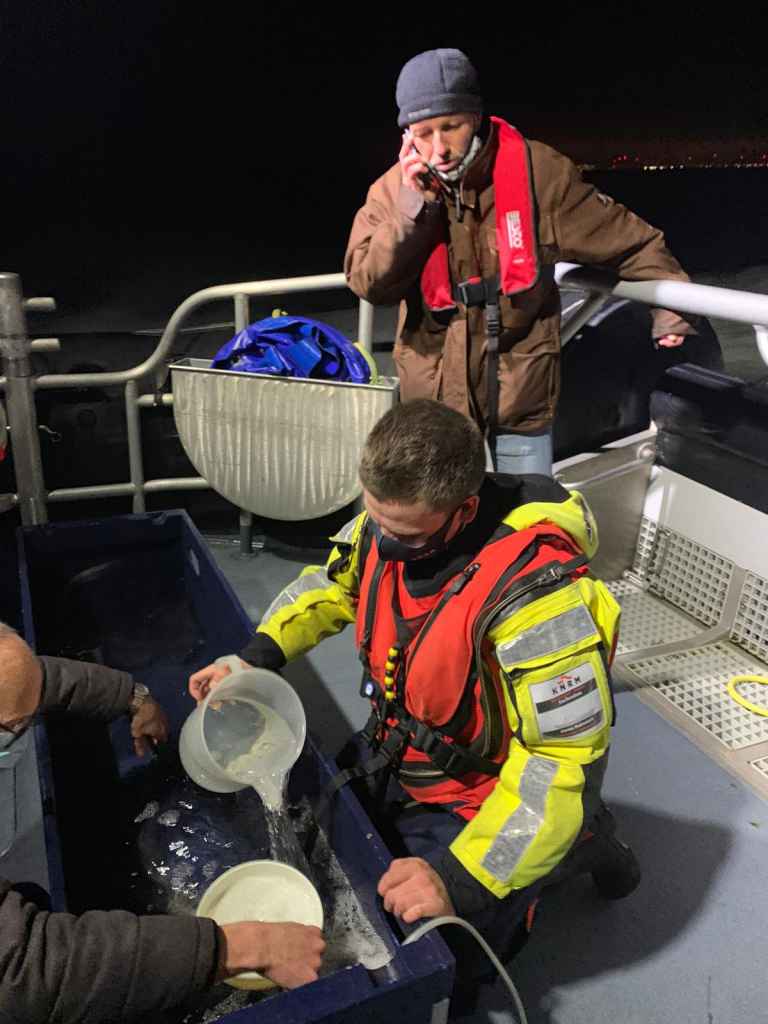